What Bikes Are Team CCC Using At The 2019 Tour De France?

For Team CCC the Tour de France this year is all about attacking, looking for good breakaways and working as a team to win a stage. But what bikes are they using to do this? We take a closer look at the bikes used by Team CCC at the 2019 Tour de France.

As you’d expect, the team use top of the range bikes and components, with no expense spared in giving them the best chance to hunt for stage wins and be as competitive as possible. 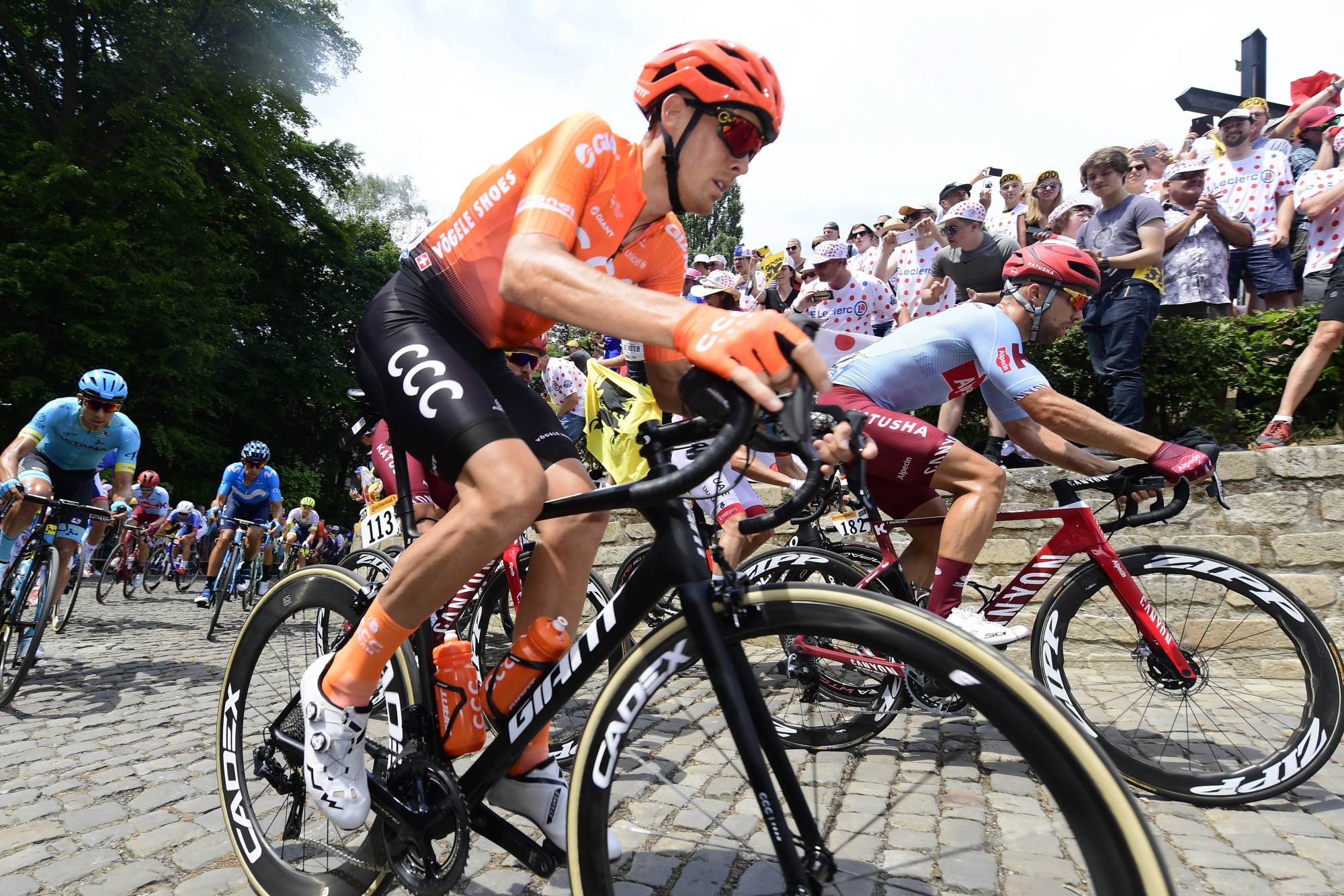 The TCR is a legendary road machine with over twenty years of grand tour heritage, including being ridden to victory at the Giro D’Italia by Tom Domoulin in 2017, and is the primary bike of choice for most of the team on the majority of the stages.

The TCR Advanced SL is the top of the range bike in the TCR range and built on the lightest road frameset ever produced by Giant. It boasts an unrivalled stiffness-to-weight ratio for pure speed and efficiency. The design of the Variant ISP (integrated seat post) helps make the bike perfectly compliant for an improved ride quality which ensures comfort during even the longest stages. Finishing touches such as the Overdrive 2 steerer tube offers unprecedented front-end steering performance, an oversized bottom-bracket design for maximum power transfer and asymmetric chainstays which provide additional stiffness on the driveside and stability on the non-driveside make this a true all round race machine.

The team are currently riding CADEX wheels, which were unveiled at the Grand Depart. While the TCR normally comes with 42mm wheels, the team have the option to use a variety of depths, as we can see from the below image showing Michael Schär, on his way to winning the stages ‘most combative rider of the day’, using a 42mm front wheels with a 65mm rear wheel. The team are using the new CADEX tyres too. 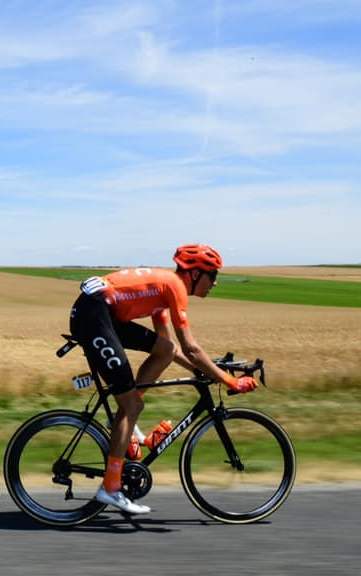 To find out more about CADEX, watch this exclusive video from GCN showing the current range here.

The finishing kit, such as the bar and stem, are all products from Giant, apart from the new CADEX saddle and a Shimano Dura-Ace Di2 groupset. The bike has already seen success at the tour as Greg Van Avermaet won the Polka Dot jersey, which is awarded to the best climber, on the first stage, highlighting just how light this bike is!

And we can’t not mention Greg Van Avermaets stunning customised TCR Advanced SL! As reigning Olympic Road Race Champion, Greg gets a custom painted gold and black bike with special details that relate to his gold medal win in Rio in 2016. 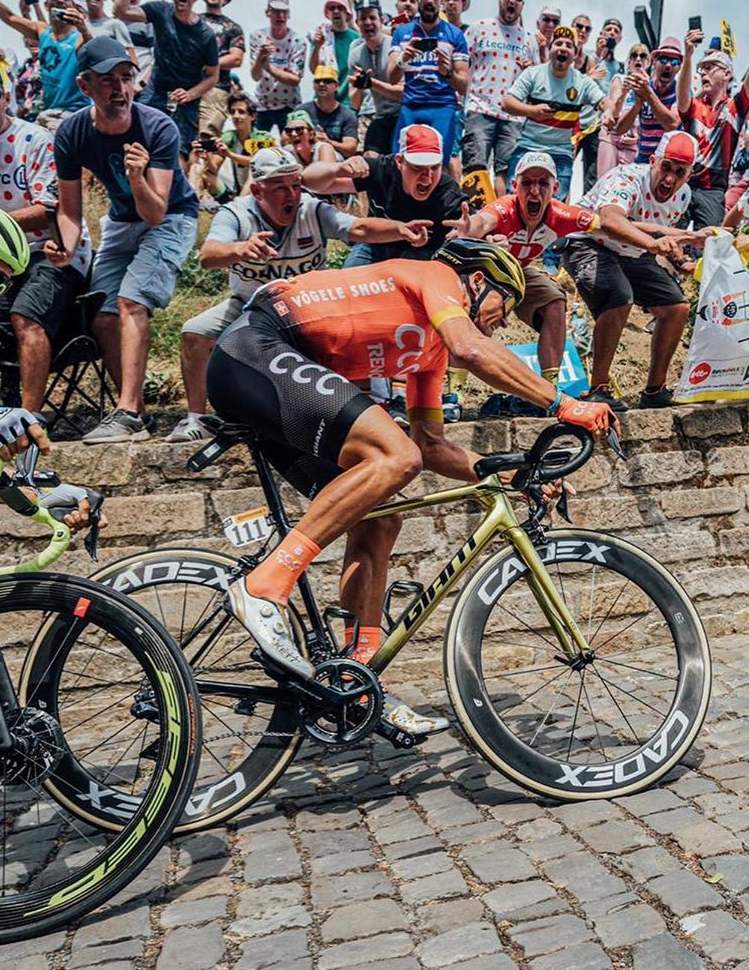 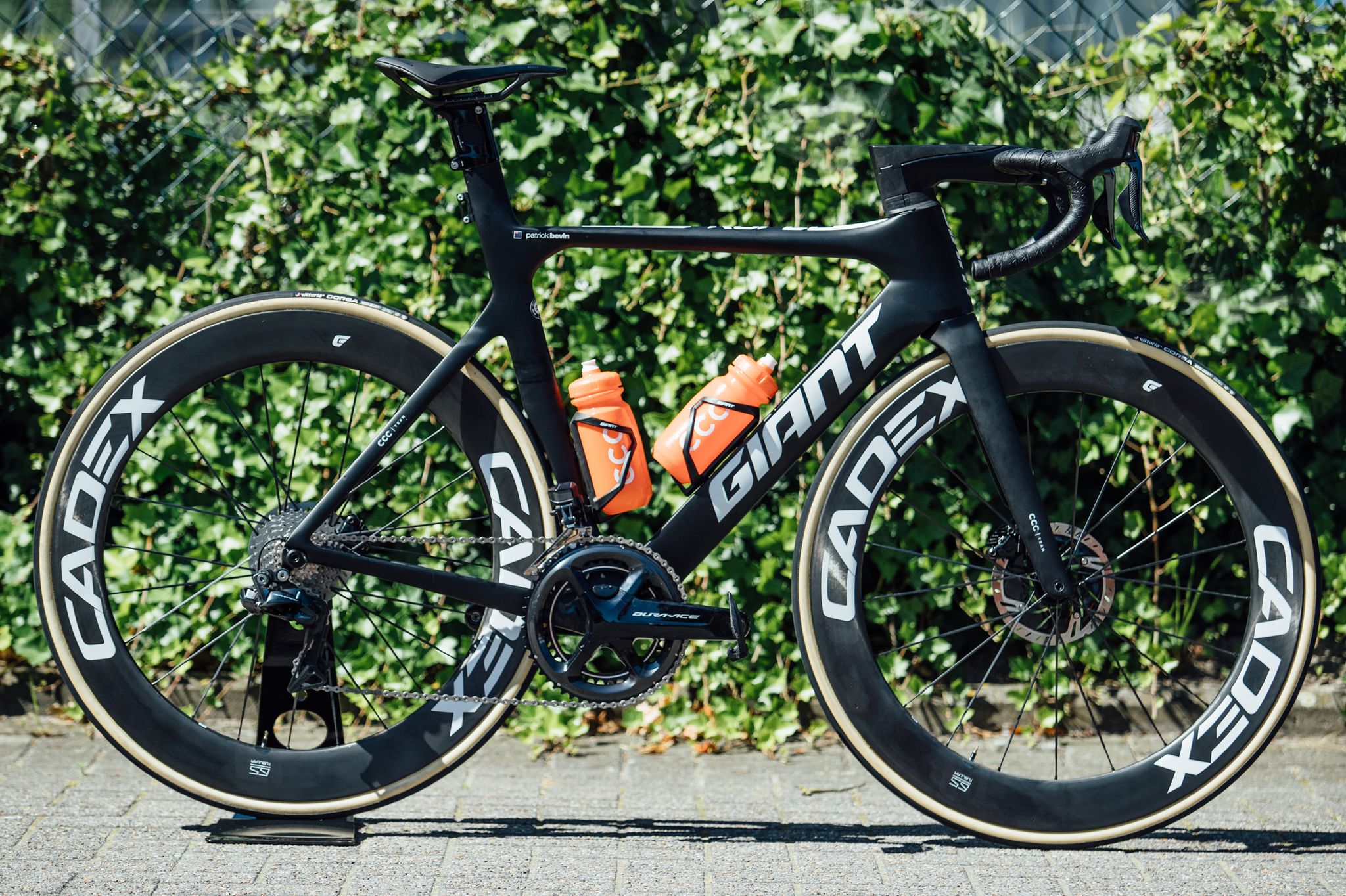 The team will also have access to the Propel Advanced SL Disc. As an aero bike, the Propel is designed for when every second counts and is usually reserved for the flat stages, where riders can make the most of the aerodynamic benefits. The Propel is engineered with Giant’s AeroSystem Shaping technology, which means that every tube shape and angle is optimised for minimal drag. These tubes feature a “truncated ellipse” shape, which also result in a frame that is ultra-stiff yet still light. Disc-brake technology is integrated into the frameset with flat-mount calipers and thru-axles for optimal wheel stiffness and braking performance and offers added confidence when riders are hitting high speeds in the sprint. Like the TCR Advanced SL, the Propel Advanced SL Disc features an integrated seatpost, which saves up to 45 grams compared to standard composite posts and further improves aerodynamics.

As an aero bike, the bike uses deeper section wheels, but again the team can choose which depth to use depending on conditions. In the above image, we see a team bike using a 65mm wheel front and rear.

Whilst the groupset is provided by Shimano, the team will be using the all new CADEX wheels, tyres and saddle to finish off this ultimate speed machine. 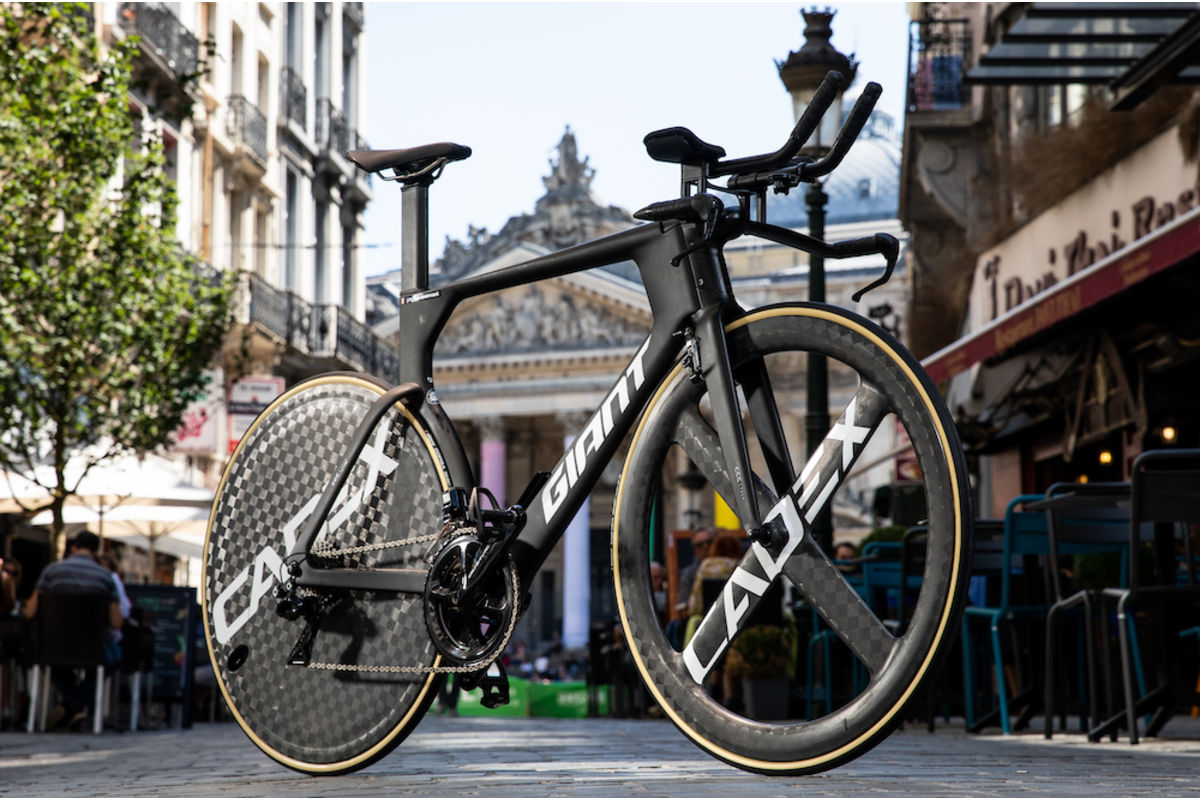 The Trinity Advanced Pro is a proven race winner and has already been ridden to many victories, not least beneath Tom Dumoulin when he won the 2017 World Time Trial Championships.

The bike has been engineered using Computational Fluid Dynamics and dynamic wind-tunnel testing, and thanks to being manufactured using Advanced-grade carbon composite and meticulously formed with Giant’s AeroSystem Shaping Technology, it slices through the wind better than any bike in its class. Every detail has been considered on this bike, including brakes that are hidden behind the fork and a water bottle set-up optimised for aerodynamics.

Like the team's other bikes, the Trinity Advanced Pro will be equipped with a Dura Ace groupset and Giant and CADEX finishing kit. Part of the new CADEX range includes a full disc TT rear wheel and a new four-spoke front wheel, which we have already seen being ridden in the Team Time Trial on stage 2. 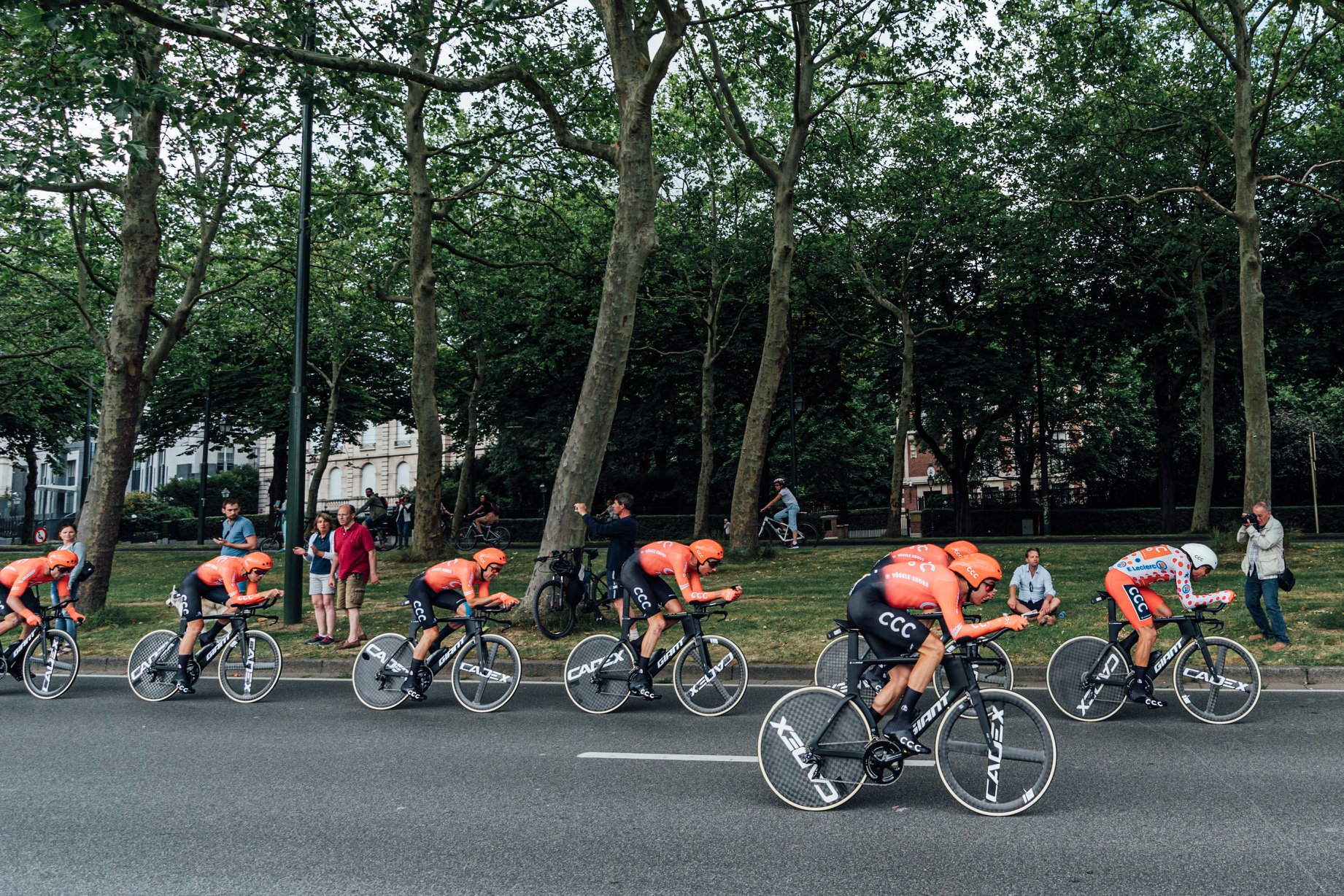 Which bike is your favourite? Let us know by getting in touch on social media!