How does Giant's flagship Enduro bike, the 2018 Reign Advanced 0, stack up for someone wanting more adventure while still being able to push it on the steep stuff? About Coming in to Enduro from a world of Downhill and Freeride can be a bit daunting. There are so many bikes on the market and arguably not much to choose from between them. After recently catching the bug for getting out on longer ...

How does Giant's flagship Enduro bike, the 2018 Reign Advanced 0, stack up for someone wanting more adventure while still being able to push it on the steep stuff?

Coming in to Enduro from a world of Downhill and Freeride can be a bit daunting. There are so many bikes on the market and arguably not much to choose from between them. After recently catching the bug for getting out on longer days out with friends in the English hills, I decided it wasn’t time to retire the downhill bike but to move it slightly to the side, for something a little more all day friendly. Wanting something that would get me to the top but really allow me to push it on the way back down. I was given the opportunity to ride a 2018 Giant Reign Advanced 0, I jumped at the chance. These are my thoughts on Giant's top level Enduro machine.

The 2018 model feels like its less about reinvention and more about refinement. That’s with good reason, last years model was praised by all. The bike has kept with 27.5 wheels and a lot of the other angles and figures have remained too, such as the 65 degree head angle and 73 degree seat tube angle. Giant have correctly left alone what already worked and instead focused on where they can get even more performance out of a tried and proven setup. The reach has been increased significantly giving the bike a much more roomy feel up front but not too much that the front would feel light. A Trunnion mounted rear coil RockShox Super Deluxe has been added with remote lock out, this gives the bike a lower leverage ratio. Coming from downhill I love the feel of a coil shock so this was a big point for me. There has also been the addition of a forged carbon rocker link to increase stiffness and give better shock performance. Boost spacing is now front and rear too, keeping in line with latest industry standards. The frame has some notable visual changes especially around the top tube and seat tube intersection with the end result looking very clean indeed. 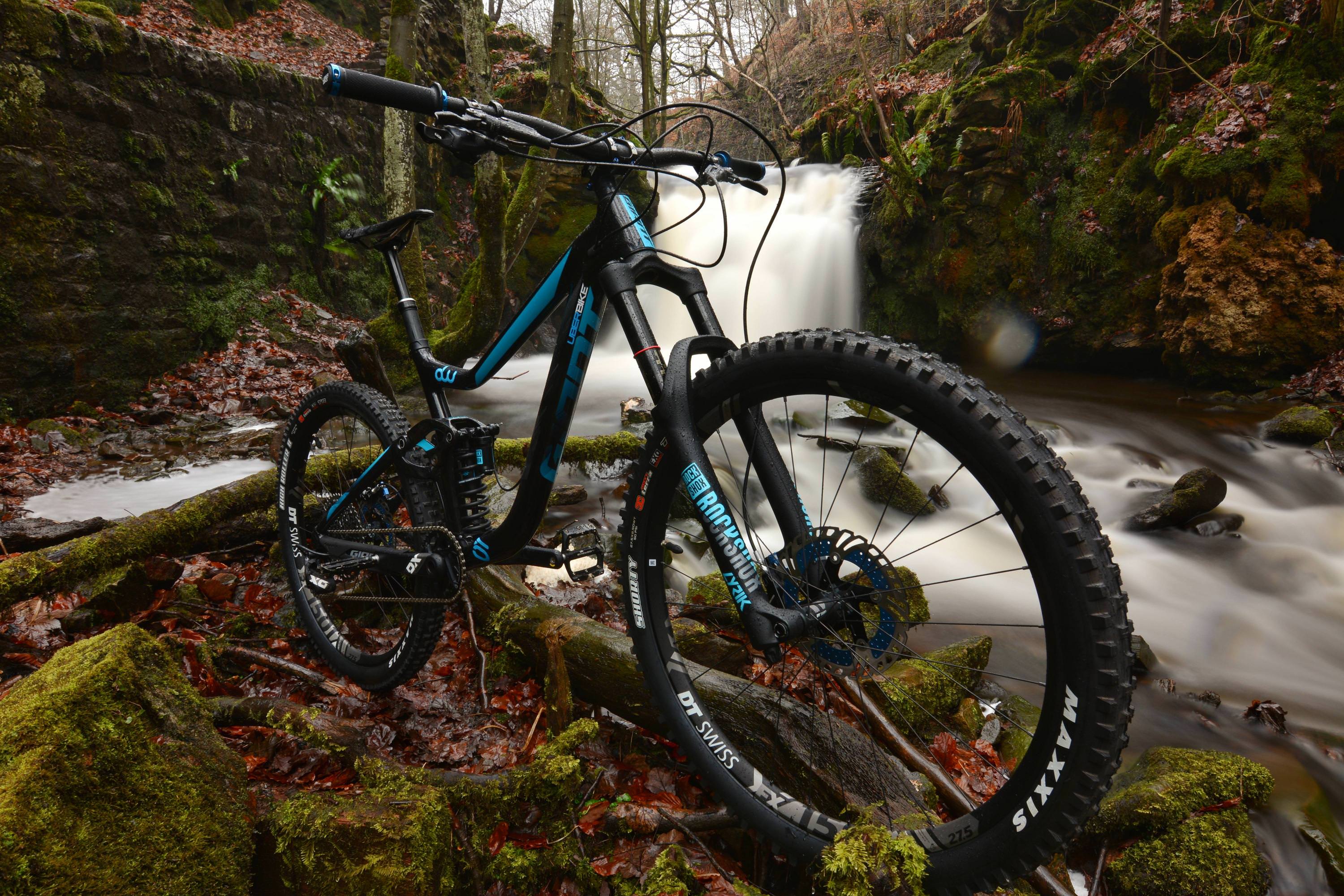 There are quite a few changes Giant have made to this years Reign Advanced 0 over last years model. Most notably is the Monarch Plus replaced by the RockShox Super Deluxe. The TRX 0 Composite wheels make way for a set of DT Swiss EX 1501 Spline wheels with the rubber changing to a Maxxis Shorty up front and a High Roller II on the back. I liked this as it’s a tried and tested setup. It is one I run most of the year on the downhill bike due to the British weather being a bit shy of the sun but very fond of rain.

The bike as a whole has impressed me. The specification is strong and performance based. The graphics this year are subtle and very clean. Giant really have been listening to the feedback they have been given and made the right changes while knowing they already had a very capable machine. It all looks very refined with no details that seem to have been missed. It looks fast, but the most important part is how it rides so without further ado... 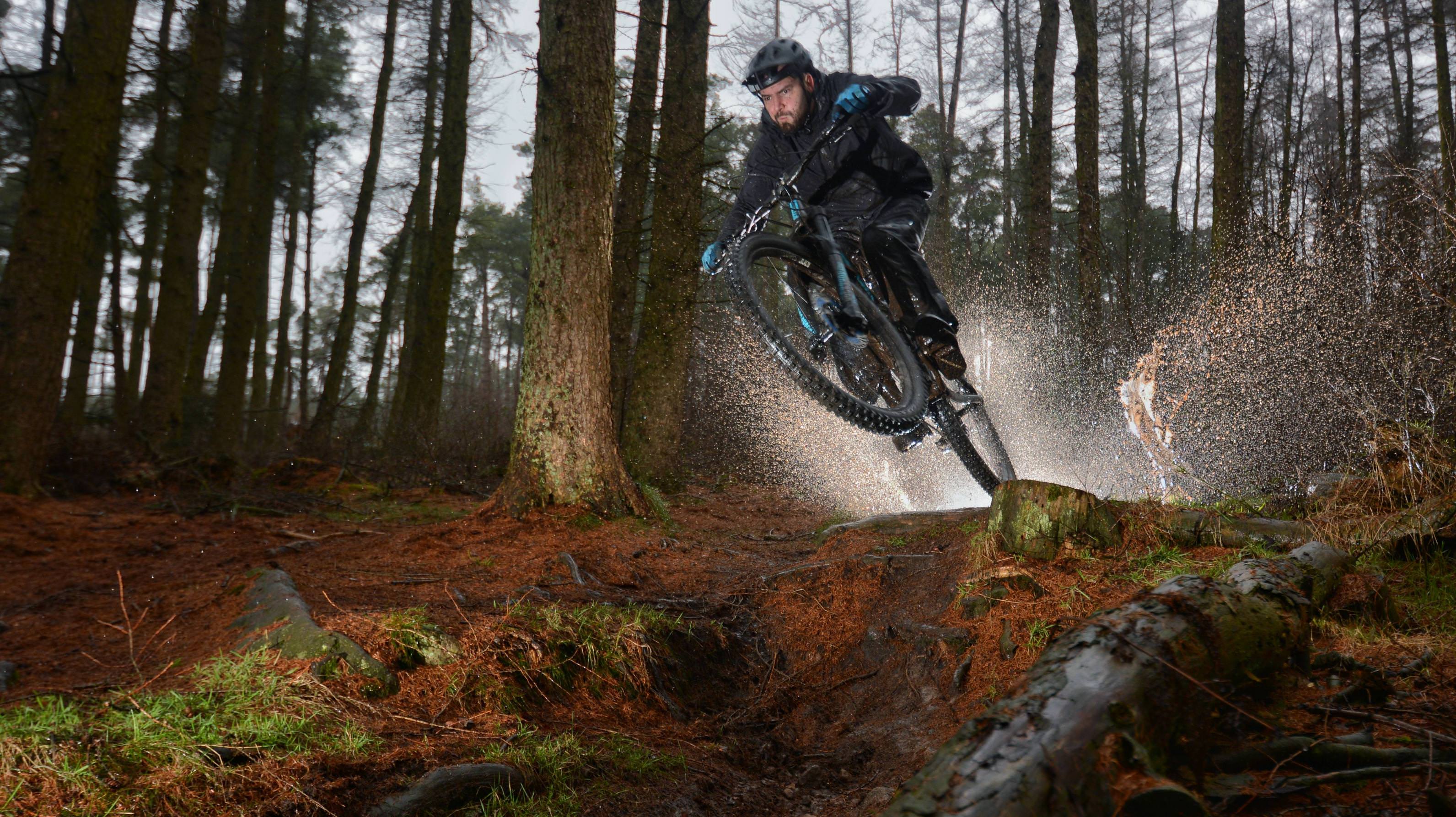 I chose to ride the bike over several locations before writing so I really felt how the bike performed on a mix of terrain and different riding styles. All of which were done under what has been a particularly cold and wet winter in the UK, which in itself is a huge test of any bikes ability and durability. From steep technical natural single track through to bike park senders and trail centres, I have covered a broad range as its pilot.

For my first ride on the Reign I chose to head over to the local mountain biking mecca that is Hebden Bridge. Full of long gruelling climbs and some steep, rocky, rooty, singletrack descents and not a single berm in sight. It felt like the perfect testing ground. Did I mention good portions of the trails were covered in snow and the rest was almost ankle deep in mud; I have now. We set off up on the first climb; with a click of the lever up came Giants Contact S dropper and instantly I was impressed, there was very little bob in the back end with the lockout off and the shock was firm but allowing the power to get put down when things climbed steeper. It just felt like it wanted to be moving forwards.

The X01 Eagle felt like it provided limitless range and made sure my legs kept spinning. Each climb we did during the day felt that little bit easier and I can say it beyond surpassed my expectations, especially for something with only 40mm less travel than I am used too. It pedalled up hill better than some All Mountain bikes I’ve tried in recent years. The shock still delivering the right amount of movement at the right time to keep tracking up and propel you forwards.

After the first few corners I was already blown away by how well the back end of the bike was working. It was handling the rough stuff with a finesse that I’ve never achieved on the downhill bike. You find you quickly adapt your riding style and ride these bikes much lighter. Suddenly realising that you are going much faster than you expect. It’s extremely agile, the lighter weight and frame stiffness meant I could throw the bike in to things a little harder or change lines faster when I needed to but could still monster truck sections when things got a little off line. The Lyrik and Super Deluxe soaking up everything in a smooth and very controlled manner. The next decent was all about the rocks and variable line choices. I found the bike was happy taking high lines and riding the off camber banks keeping away from the horrors in the middle of the trail. All while doing so at what felt like warp speed.

The brakes got put to the test with several hard braking zones and never skipped a beat. They don’t have the jaw dropping instant power of some other brakes but this is not the kind of bike where you need that. Instead the Guide RSC provides a much more modulated feel with the power really coming in strong towards the end of the stroke. One thing I did notice however was at full speed, I felt like I could go that little bit faster but the gearing would not allow me too. Nothing two more teeth on the front ring wouldn’t solve, or was I just being lulled by the sheer confidence the bike gives you when going quickly? I don’t think so, as I never felt like it was out of control even when maybe I was. The rest of the days trails varied from root gardens to rock gardens and almost everything in between and it never skipped a beat.

Following it up with a day at the bike park and realising just how well it can rail a berm, seemingly exploding you out of corners, the bike felt alive. It’s a very engaging ride that makes you feel part of the bike, like dancing partners perfectly in sync. This just makes you want to push. As much as I tried I never seemed to find the limit where it couldn’t hold on anymore. The grip was endless despite the slop. This bike really likes pointing downwards. 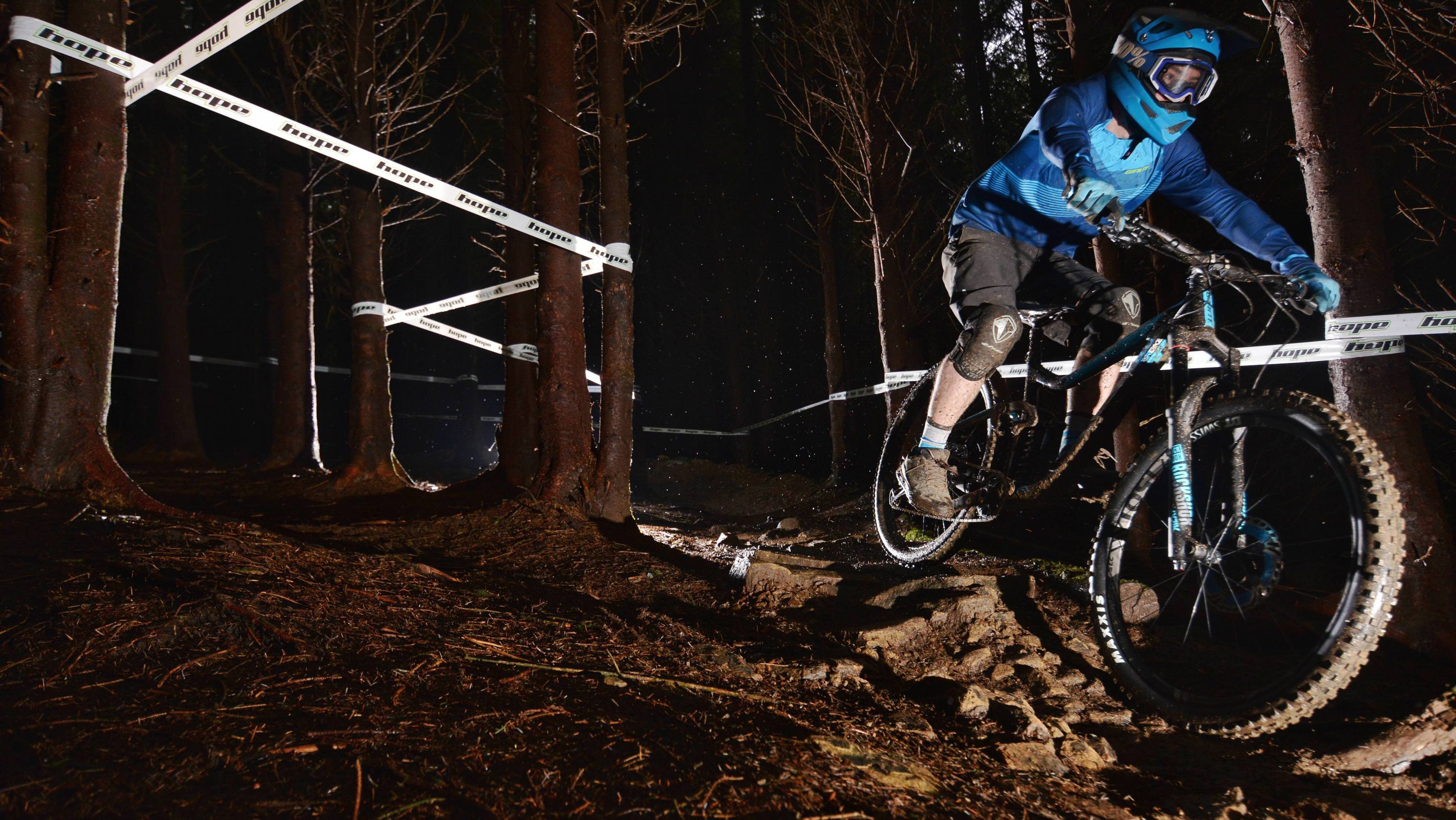 It’s no secret that I love jumping around on bikes. Fortunately in the UK they don’t come much bigger than Havok Bike Park’s freeride lines, which happens to be my local bike park. I will admit I was quite nervous that morning as it would be the first time I had ridden a bike that wasn’t a downhill bike at that location. I hadn’t had the bike properly airborne on something big before this point, with only riding trail centre and technical single track beforehand. I really had no idea what to expect from it the moment it took off. It was a very icy day and sadly the top half of the freeride had to be closed as the wooden features were iced over but the bottom half was open and still contained some features that would scare many a rider. I pulled on the full face and dropped in. Approaching the table I was unsure if I had the pace to clear it as I felt like I was going a lot slower than I normally would. To my surprise the bike sailed over the jump landing exactly where it needed too. I then proceeded to go deep off the following drop. Landing almost to flat from about 12ft up, it bottomed out at both ends but the bike took it well. Though it was a heavy landing it didn’t bog down or stall at all and kept me moving forwards. I halted on the line. I turned round and went back up. First run jitters out of the way it was time to get to business. I spent the rest of the morning playing on the various doubles, drops, hips and wallrides and was amazed by how good the bike felt in the air. Stable out of the lip and on landing and I always felt like I was in control. A predictable bike is crucial to jumping and this was exactly that. Hitting the big hip and doubles I was instantly able to throw some shapes and land cleanly every time. It was at this point I quite simply fell in love, it had just ticked the last box. 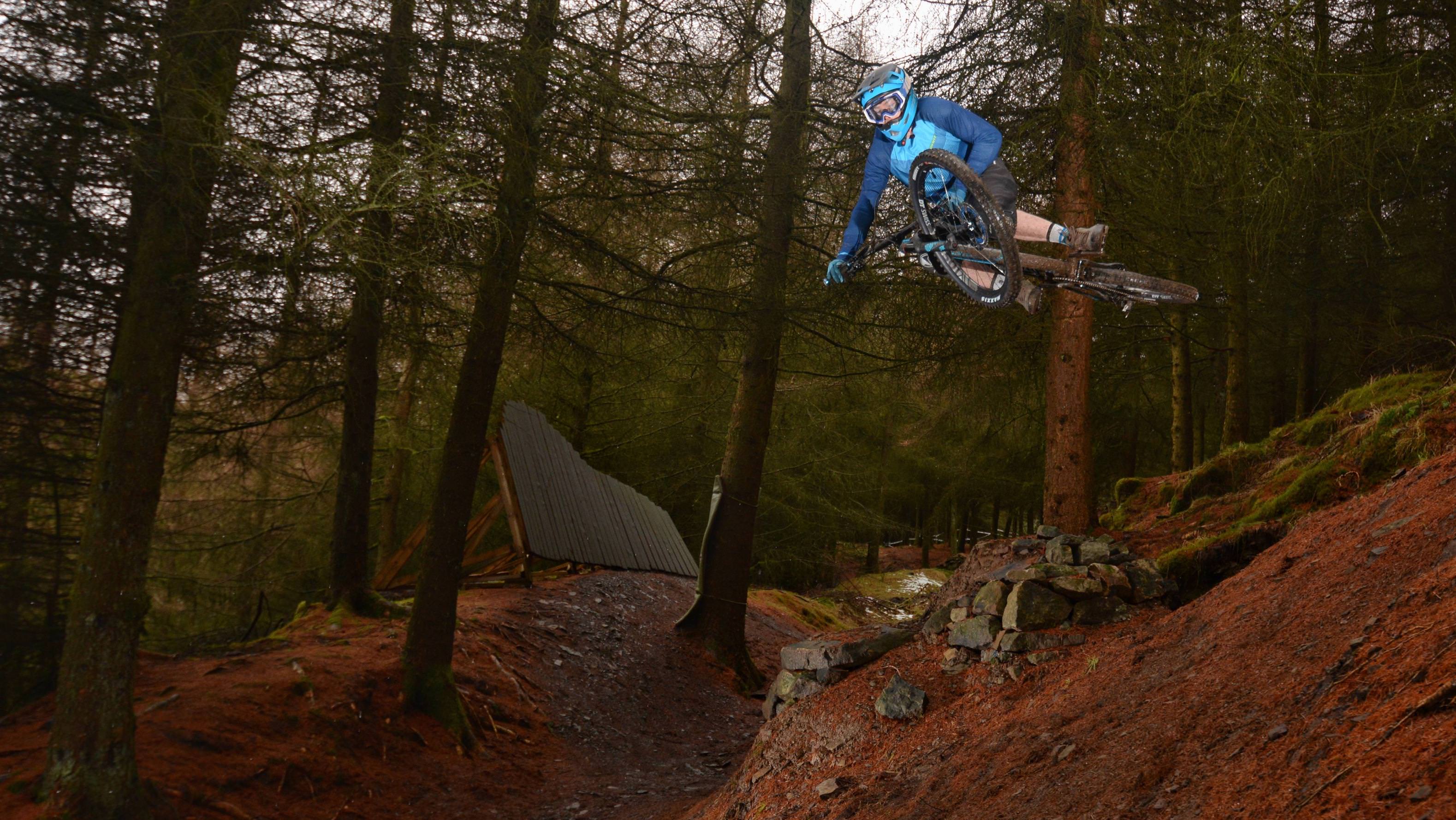 The Reign blew away my expectations in almost every way. Not only did it feel like it descended the trails as fast as my downhill bike it did so in a way that felt so refined and never out of control, regardless of speed or terrain. Agile when needed but planted in the rough. It keeps the playful properties brought to it from what is now a very refined Maestro suspension platform. It’s easy to jump and play around with in the air while being able to do so at a slower speed due to its incredibly low weight. I was falling for the bike after the first two rides by the end of the third one I was in love with it. Everything I had put it through, it felt like it was asking for more. Each challenge met with a big tick in the box and an even bigger smile. Given all the additional riding this bike will allow you to do whilst still being so gravity focused it’s impossible not to appreciate just how good this bike is. Could it be time for me to retire the downhill bike? Time will tell, but the more I ride the Reign the less I miss the big bike.

Matt Bottrill - Why Recovery Is So ...

Matt Bottrill - How To Build Toward...